Marie Louise was born April 28th, 1934, in Hibbing MN. and was the youngest of eight children. She lived in Chisholm MN and graduated from Chisholm High School in 1952 with honors. She then attended Hibbing Community College. Prior to her marriage she was employed by the Pacific Isle Mining Company in their legal department for eight years.

She was united in marriage to Jerry P. Rock in 1961 and promptly moved to Duluth. There together for 57 years they started a family, grew a business, and prospered while moving twice to different locations within the twin ports. Finally building their retirement home in Superior on the St. Louis River. Survivors include David and Beth Rock and their children Jennifer and Logan of Birchwood WI; Martin and Judith Rock and their children Nathan and Carter of Inver Grove heights MN; Alan and Stephanie Rock and their children Derek, Carl, Simon, and Faith of Duluth MN; daughter Louise Kohn and her sons Alexander and Morgan of Superior WI.

While her children were young, she was a stay home mom. There she raised her 4 children, was involved with the Boy Scouts, and taught weekly religion classes at her church. She was a devoted wife, mother, grandmother, and lead by example and lived her life with grace, strength, and dignity.

Marie Louise was employed by the Presbytery of Northern Waters for twenty-three years until her retirement in 1999. She was a member of the P.E.O. Sisterhood in Superior and served as President as well as several other officers over the years. She was a gifted pianist who pursued her studies both in Minnesota and in France where she acquired a love for baroque pipe organs in her early years. She loved all organs, which lead to her being employed as an organist in several Twin Ports churches for over 50 years.

Jerry and Marie traveled extensively both with their children and in their retirement. They made five extended trips to Europe and visited every one of the 50 states.

Visitation will begin at 10:00 AM, Thursday, January 20, 2022, at St. Francis Xavier Catholic Church, 2316 E. 4th Street, Superior, and will continue until the 11:00 AM Memorial Mass of Christian Burial with Most Rev. James P. Powers as celebrant, and Rev. Fr. James Tobolski as concelebrant.

Burial will be in the Northern Wisconsin Veterans Memorial Cemetery in Spooner, WI.

The Lenroot-Maetzold Funeral Home, 1209 E. 5th Street, Superior, is assisting the family with arrangements. To leave a condolence or sign the guestbook, please visit our website at www.lenroot-maetzold.com. 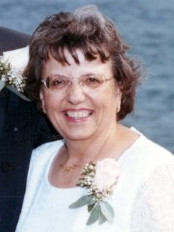