Kay was born in Duluth to Robert and Dorothy Davey on January 2, 1940. She went to Central High School and graduated in 1958. She married Rodney Anderson on May 9, 1959 at First Methodist Church in Duluth. She worked as a purchasing agent at First American National Bank for 5 years, and then became a homemaker. She enjoyed going to craft shows, watching all of her kids and grandkids play sports or perform in dance recitals.

Kay was preceded in death by her parents; and brothers, Robert Davey Jr., Richard Davey and Dale Davey.

The family wishes to extend their gratitude to Dr. Thomas Heinitz and the staff at Essentia Health Proctor.

Visitation to be held at 4:00 PM on Thursday, January 6th at Sunrise Funeral Home, 4798 Miller Trunk Hwy, with Funeral service to follow at 5:00 PM. 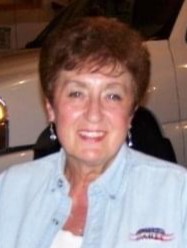