James Gerald (Jerry) Gentry, 80, of Duluth, passed away after a long-term illness on June 24th, 2022. He was born on April 24th, 1942, to the late James Gentry and Pauline (Pitts) Gentry. He graduated from Duluth East High School. Jerry, as most knew him, is preceded in death by the love of his life, Carol Gentry (27 years), and his late wife Jan (Peterson) Gentry. He is survived by his first wife Alita Gentry; son, Thomas (Courtney) Gentry of Worcester, MA; daughter, Maria (Jason) Gentry of Chicago, IL; six grandchildren, TJ, Kegan, Mykenzie, Jace, James, and Andyn; grand-dog Duke; Sister Judy (Ken) Newman of Duluth; Brothers John (Nubia) Gentry of Marco Island, FL, Jay (Cheryl) Gentry of Blaine, MN, and numerous nieces and nephews. Jerry served in the Army, and then worked most of his life at Mount Royal Super Value. He was an avid outdoorsman, a hunter and fisherman who enjoyed passing on his love for the outdoors to his children and grandchildren. Jerry was warm, gracious, caring, funny, a little stubborn, but above all else, kind. He was a wonderful and devoted husband, father and grandfather and will be missed by all those whose lives he touched. A gathering in celebration of Jerry’s life will be scheduled sometime later this fall. 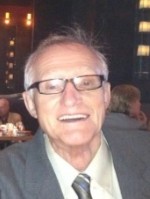