Carrie took a part-time temporary job at Rural Electric Co-op in Park Rapids, MN in 1964 and retired as Accountant/Office Manager thirty years later. Harry and Carrie loved travel and friends. The household motto was “there is always room for one more at the table”. They were very loving parents and grandparents. They spent many winters in California with Ken and Eunice living on their property.

In Park Rapids, Carrie was a very active member of Calvary Lutheran church, Eagles Auxiliary 870 and the music community. She was an artist of watercolor and Tole painting and Rosemaling. When she moved to Duluth in 2012, she was immediately active in her senior community at her residence; first at Edgewood Visa and then at Francisan Health Center. At both facilities, she made friends quickly and was always looking for the next activity.

Carrie is preceded in death by her parents, an infant brother, her husband, Harry, and her son, Denny.

At Carrie’s request, there will be a family celebration of life at a later date in Park Rapids, MN. 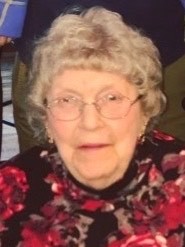