Cameron Francis “Mac” McKercher, 77, of Glenwood, MN, formerly of Duluth and Plymouth, MN, peacefully passed away with his family by his side on May 26, 2022. Mac was born on August 28, 1944, in Duluth, MN. He was raised in Gilbert/Duluth and graduated from Denfeld High School in 1962. He enlisted in the U.S. Navy and was stationed in Japan on the USS Orleck. In 1967, he married Lucy Stenberg and they resided in Covina, CA. He graduated from West Coast University with a BS degree in Engineering. While working for Honeywell, Mac and his family transferred to Plymouth, MN, where he lived until 2008, then retired to Lake Reno with Lucy.

Mac loved lake life, golf, and a good fix-it project. He had a soft spot in his heart for all animals, especially birds and dogs. He was known for his handiness and loved helping others. Mac’s love of music touched everyone, especially the old Wellington neighborhood. His sense of humor was well-known among every person he met. His generosity knew no bounds. Most important to him was family.

A celebration of life will take place at Lake Reno on August 27, 2022.

Special thanks to the oncology department at Alomere Health in Alexandria, MN. 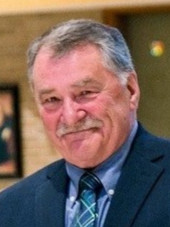